First Diamond inserts the special attack charm on the Glitter Pad's medallion and draws a heart on the screen, making the smaller heart inside it blinks 2 times as it says "Doki Doki!" She then points a finger to the sky and swings her arm to point at the enemy as she spins around and fires a beam of ice to the enemy.

This is the only attack in the Doki Doki version to be fired using a finger.

This attack shares some similarities with Sparkle Lightning from the non-Doki Doki version. Both girls point their finger(s) up at the sky before spinning around to fire. They also fire using their finger(s).

From episode 6 onwards this attack seems to work differently. Instead of purifying, it freezes the target in a large blocks of crystal ice. 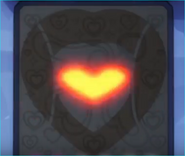 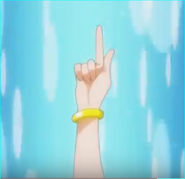