Lance is a yellow bear-like pixie and is partners with Clara. With his help, Clara can transform into Glitter Clover and perform her attacks. He is also the youngest out of the other pixies.

He is the third of the pixie triplets. He is a little spoiled. He later learns to transform into a human form, resembling a very young boy with curly hair. In the Japanese version, he ends his sentences with "~de ransu!". He is named after "Lancelot", the Knave of Clubs.

Lance is cute, yet also a bit naive and a little spoiled. He was determined to find a partner, and found Clara as the perfect one.

Clara: Lance is Clara's fairy partner. He is really attached to her, and is in her care. 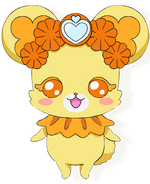 Lance as a pixie

Lance as a Glitter Pad 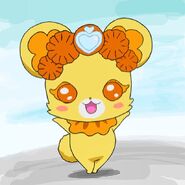