The Glitter Shadow Force (Bad End Pretty Cure in the original Japanese version), were a group of minor characters in Glitter Force.

They were created by Rascal using 5 trump cards and the final Glitter Charm, and are the opposites of the original Glitter Force.

They made their first appearance at the end of Episode 17 (season 2), but only fought the real Glitter Force in Episode 18 (season 2).

As dark copies, they look very similar to their respective counterparts save for a slightly darker hair color and slight differences in hairstyle. Their outfits are predominantly black with skirts that are slightly darker than their respective counterparts' theme colors. They wear bat-winged hairbands and have a jewel right over their chests. Their eyes resemble slightly-glowing circles and are very unlike all the other human characters'. Finally, they have eye-shadow applied over their eyelids.

Shadow Lucky (Bad End Happy in the Japanese version) : Glitter Lucky’s dark counterpart. She loves happy things and being happy in its own right, but doesn't care whether or not everyone else is miserable. In fact, her seeing others in despair makes her feel fortunate and confesses to getting pleasure from seeing others suffer. To this end, she intends on bringing despair to everyone in the world, starting with Glitter Lucky. When fighting Glitter Lucky, her dimension is a pink/brown void with rocks of varying sizes floating within.

Shadow Sunny (Bad End Sunny in the Japanese version) : Glitter Sunny’s dark counterpart. She wants to be the Sun that burns everything to the ground. She does not believe that the Sun should be used for goodness whatsoever and is disgusted by what Glitter Sunny believes the Sun is for. She doesn't like friendship and thinks it's unnecessary. When fighting Glitter Sunny, her dimension is a dark-purple flat plain that seems to be at sunset.

Shadow Peace (Bad End Peace in the Japanese version) : Glitter Peace’s dark counterpart. She also has crybaby tendencies, but she also likes to toy with other people's feelings by faking remorse. She firmly believes that world peace is impossible and that only little princesses would try getting something like that. When fighting Glitter Peace, her dimension is a flower field consisting of giant flowers and a dark-cloud enshrouded sky.

Shadow Spring (Bad End March in the Japanese version) : Glitter Spring’s dark counterpart. She believes that a truly sportsman-like match is fighting her enemies with no remorse and she would stomp on all who cross her. She also believes that "The strong shall hurt the weak", "Finish off your enemies completely." When fighting Glitter Spring, her dimension is various clouds and vines that gives the impression of "Jack and the Beanstalk."

Shadow Breeze (Bad End Beauty in the Japanese version) : Glitter Breeze’s dark counterpart. She loves only things that are beautiful, and believes that someone is most beautiful when they win. She does seem to have a level of respect for her counterpart, but only a small amount and only after one of her attacks was repelled. When fighting Glitter Breze, her dimension is an Arctic plain with numerous pillars of ice; a full moon hangs in its dark sky.

Shadow Force Heartbreaker (Bad End Shower in the Japanese version) : Shadow Lucky’s attack. She first makes a heart-sign before gathering energy into a purple heart. She then fires the beam of energy.

Shadow Force Fireball (Bad End Fire in the Japanese version) : Shadow Sunny’s attack. She sheathes herself in purple fire and rams her target.

Shadow Force Thunderbolt (Bad End Thunder in the Japanese version) : Shadow Peace’s attack. She makes a peace sign with her fingers and raises her hand. Purple thunder is summoned and strikes her enemy.

Shadow Force Corner Kick (Bad End Shoot in the Japanese version) : Shadow Spring’s attack. She conjures a gigantic purple soccer ball-like sphere of wind and then kicks it to her target.

Shadow Sunny standing in the hole blasted out by Shadow Force Fireball. 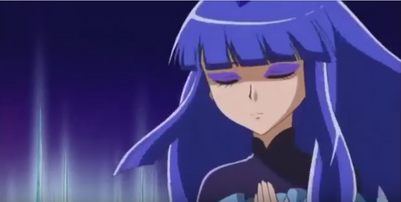 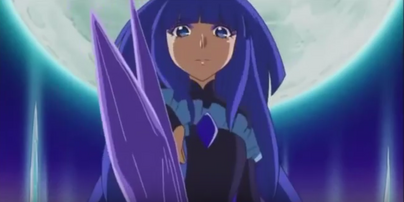 Shadow Breeze pointing at Glitter Breeze with her ice sword.