Glitter Charms,(Cure Decor in the original Japanese version), are special pieces that can be used either to revive the Queen of Jubiland or bring about an unhappy ending. Each Glitter Charm symbolizes the source of power of happiness of the Queen. The Glitter Charms are stored inside the Charm Chest.

Glitter Charms can be shaped like animals, food, fruit, flowers, cosmetics, and all kinds of other everyday objects, but they are all engraved with the Glitter Force emblem. All Glitter Charm pieces have a small ribbon with a heart-shaped jewel attached.

The transformation charms are ribbon-shaped. In the middle, they have the color and shape that symbolizes its owner (a pink heart for Glitter Lucky, a red circle for Glitter Sunny, a yellow star for Glitter Peace, a green pentagon for Glitter Spring, and a blue diamond for Glitter Breeze). In the top-right corner, there is a small, white, circle-shaped jewel.

The Tiara Charms are modeled after the shapes that symbolize their owner. Close to the edge, there is a border of numerous tiny dots. At the top is a small, white heart with two small dots on either side.

The Glitter Princess Mode charms retain the colors of their owners, but they have new shapes (a cherry blossom for Lucky, a rose for Sunny, several stars for Peace, a four-leaf clover for Spring, and a snowflake for Breeze). At the bottom, they have a golden bow. In the center of the bow, there is a heart with the theme color of the owner. To each side of the bow, there are three golden shapes that resemble wings.

The Ultra Mode charms all look the same. Their base is a pink circle whose top resembles the top of a Tiara Charm. In the center is a gold-and-white striped bow. On each side is a large, feathery wing that is pink on the outside and white in the center. Overall, Ultra Mode charms are far larger than any other Glitter Charm.

Five special charms, shaped like ribbons, are used by the girls to transform into Glitter Force. These appear in Episodes 1 through 5.

Five other charms, the jewel-shaped Tiara Charms, give the Glitter Force the ability to power-up to their next form, Tiara Mode, and to perform the group purification attack Tiara Mode Torrent. These appear in Episode 11.

The Charm Chest is first filled in Episode 20. This gives Queen Euphoria the opportunity to revive. However, when she notices that the Glitter Force is about to be killed by Emperor Nogo, she uses the power to save them instead. The sixteen Glitter Charms that the Glitter Force has collected turn into a special charm that causes the Princess Wands to appear.

Five more charms, which also appear in Episode 20, allow the Glitter Force to achieve their third form, Glitter Princess Mode, and allow the group to do Rainbow Burst with the Princess Wands.

In Episode 26, the Charm Chest is filled for the second time, causing the Royal Clock to appear. In the next episode, a new Glitter Charm appears and allows the Glitter Force to perform Royal Rainbow Burst when it's inserted into the Royal Clock.

In Episodes 32 to 36, the Glitter Force gains large, winged charms that enable them to enter their fourth form, Ultra Mode. This gives them an aura of light and enables them to perform upgraded versions of their attacks that they can combine to create new attacks.

Finally, in Episode 38, the Charm Chest is filled for the third and final time. This enables Candy to transform into a human form, Queen Candy, and emerge as the new queen of Jubiland. 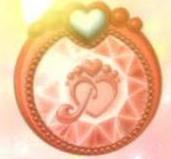