Bel is one of the villains in Glitter Force Doki Doki.

Bel is the leader of the Mercenare Trio that faces the Glitter Force early in the series. He is a bearded man who wears sunglasses. After killing off Riva and Gura for their dark energy, Bel becomes a leader of the mercenare Trio after having Ira and Marmo wear the Blood Rings he created from the stolen dark energy from the deputies. But Bel later loses the Blood Rings when they are destroyed by the Glitter Force while deposed by Regina's return. In the finale, though he intended to gain a new power by eating a surviving fragment of King Mercenare , Bel ends up becoming a vessel for the Proto Mercenare and is purified back into his true form, a rat, upon the monster's death. His name is derived from Belphegor, the demon representing Sloth.

Based on his name, Bel is one of the cruelest Mercenares. Bel is rude, very selfish and is a servant to King Mercenare. Bel represents Sloth, one of the 7 Deadly Sins, and makes Ira and Marmo do all the work for him. He rarely does the job. He also really likes to eat lollipops and is seen eating a green one in some episodes. 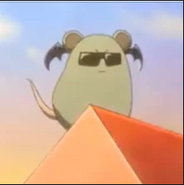